These infographics show what might happen in an eruption on Taranaki Maunga. They are designed to give a simple and accessible overview of common volcanic processes and what to do in an eruption. 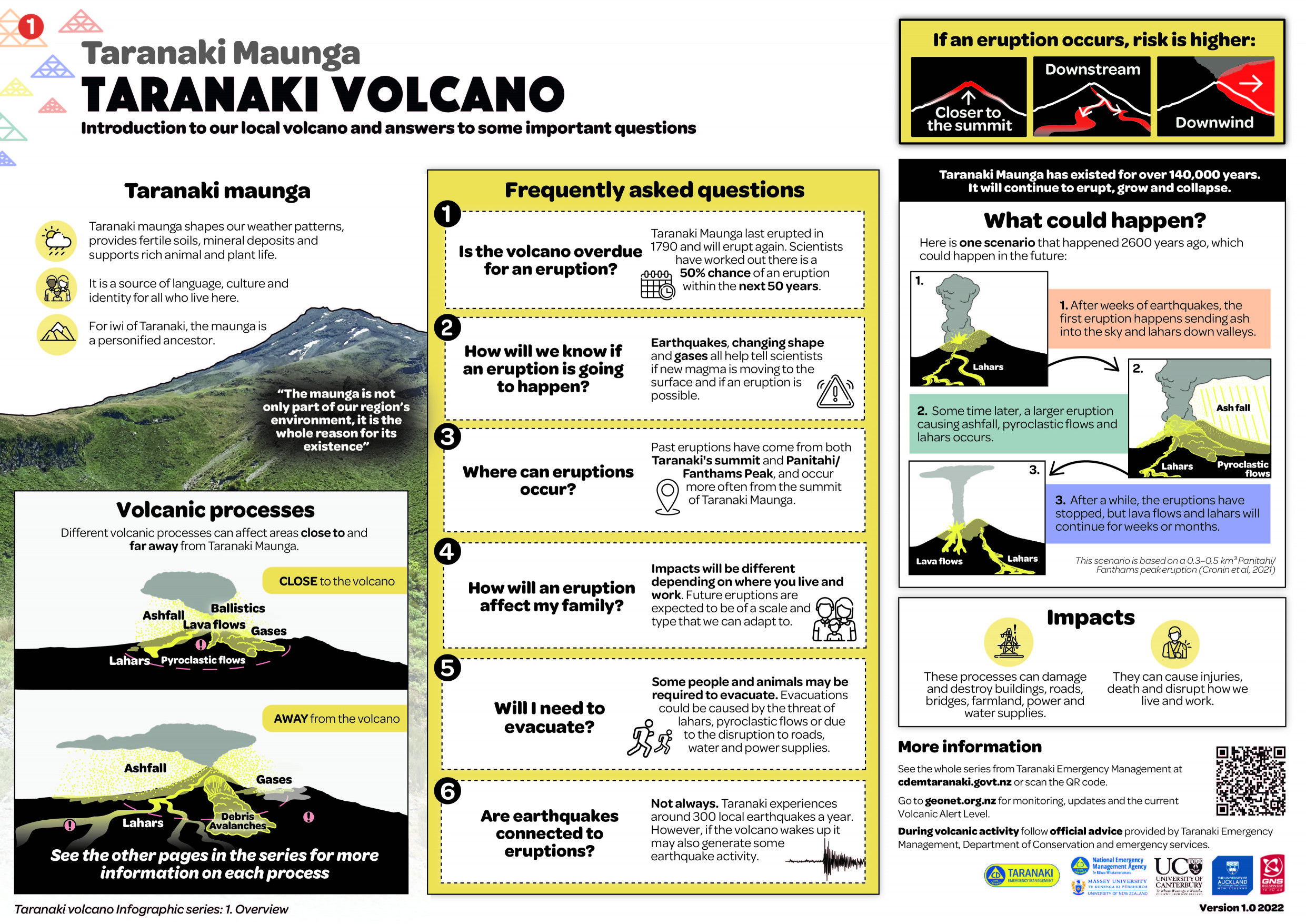 Read more about the history and geology of Taranaki Maunga.

Download high-quality infographics at the bottom of this page. 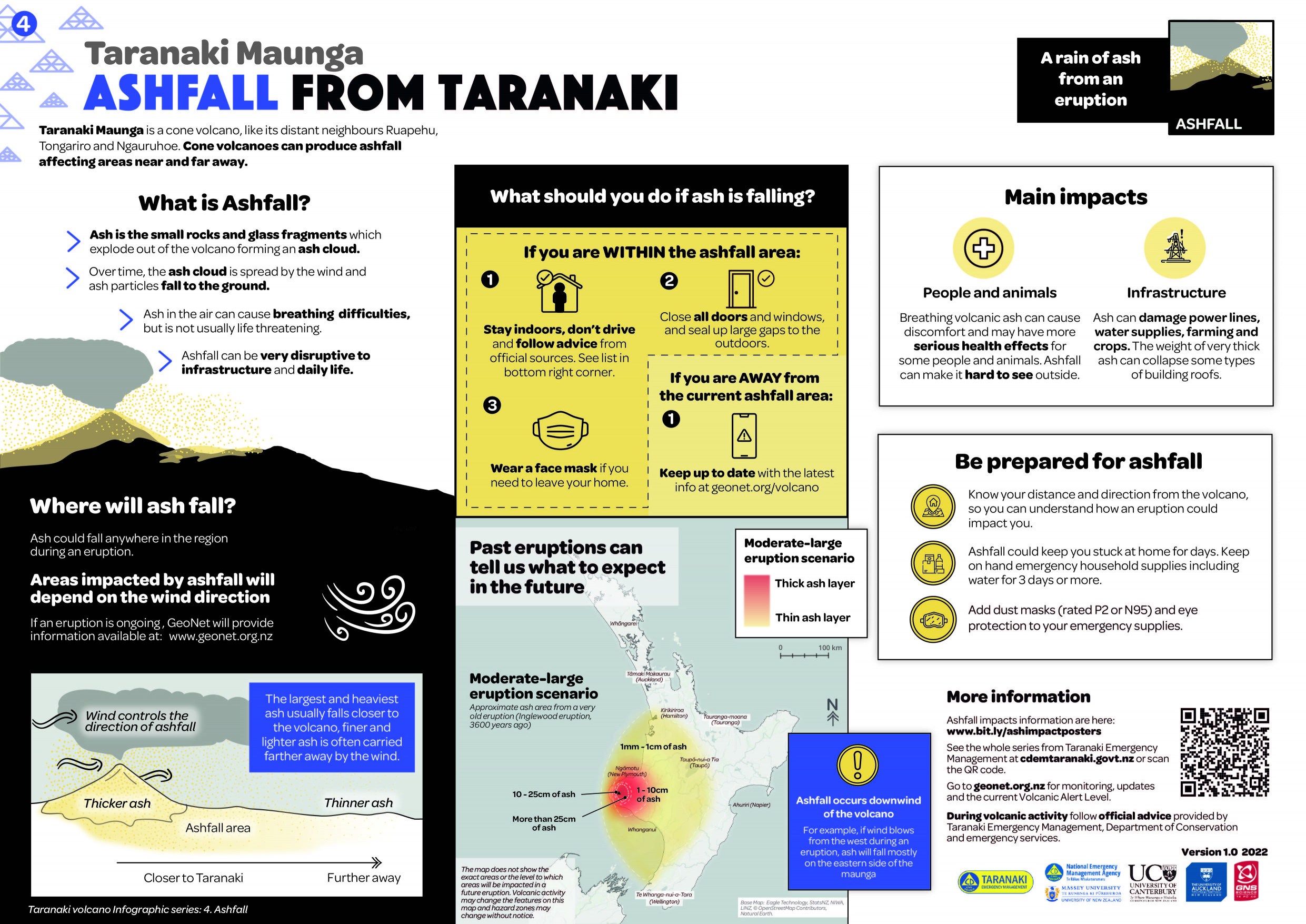 Ash is the small rocks and glass fragments which explode out of the volcano forming an ash cloud. Over time, the ash cloud is spread by the wind and ash particles fall to the ground.

Ash in the air can cause breathing difficulties but is not usually life threatening.

Ashfall can be very disruptive to infrastructure (like water supplies, power lines, roads and farmland) and daily life.

The areas affected by ash fall will depend largely by the predominant wind direction, but could fall anywhere in the region. It will be most heavy and thick closer to the volcano.

The best way to stay safe from ashfall is to stay inside, don’t drive and follow advice from official sources. Close all doors and windows, and turn off any air-conditioning units.

Wear a dust mask and eye protection if you need to go outside. It’s a good idea to add these to your emergency supplies. 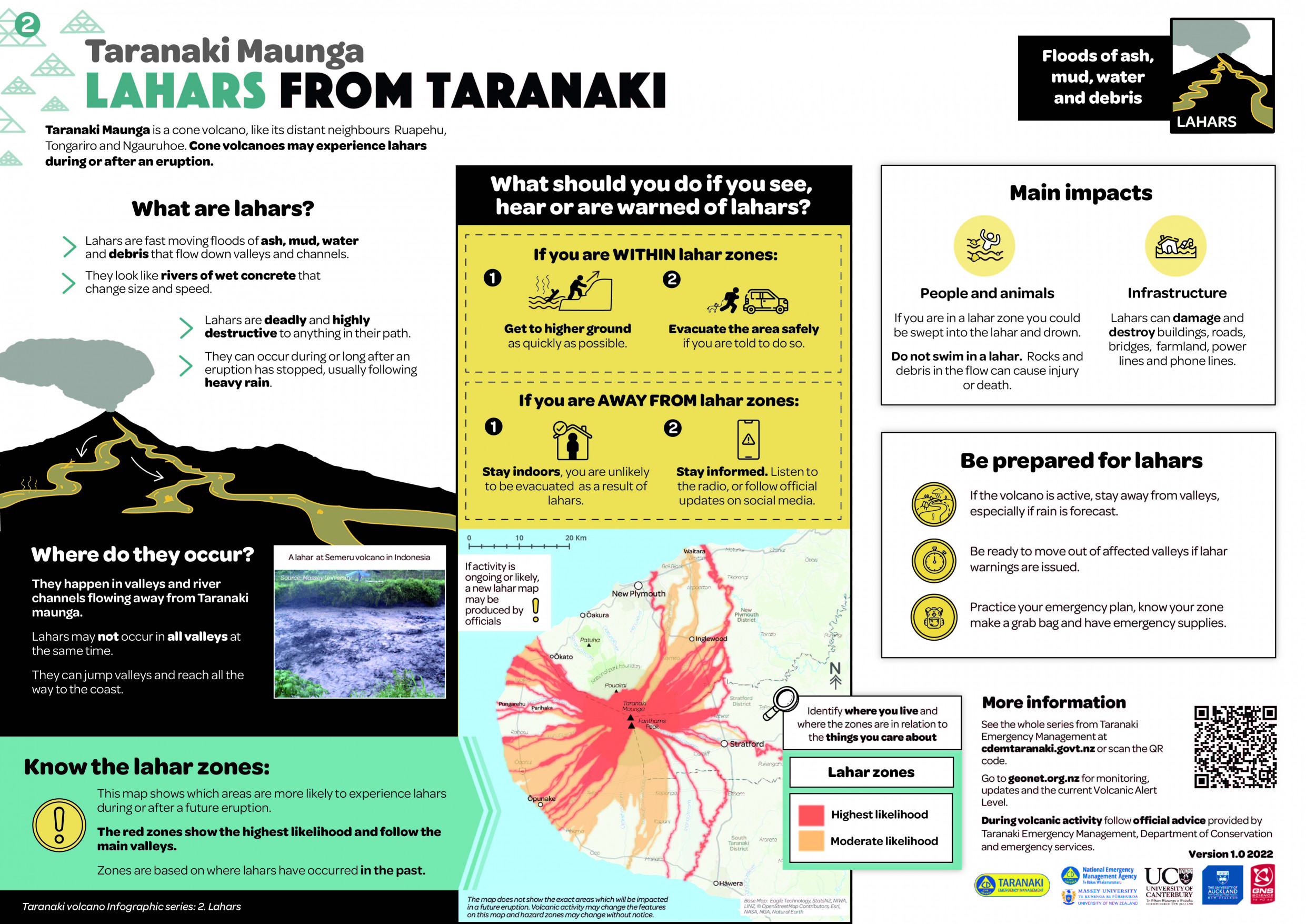 Lahars are fast moving floods of ash, mud, water and debris that flow down valleys and river channels on the volcano.

A lahar looks like a slurry of wet concrete, and as it rushes downstream, its size and speed can rapidly increase.

Lahars are deadly and highly destructive to anything in their path. They can occur during or long after an eruption has stopped, usually when there is heavy rain.

If the volcano is active, stay away from valleys, especially if rain is forecast. 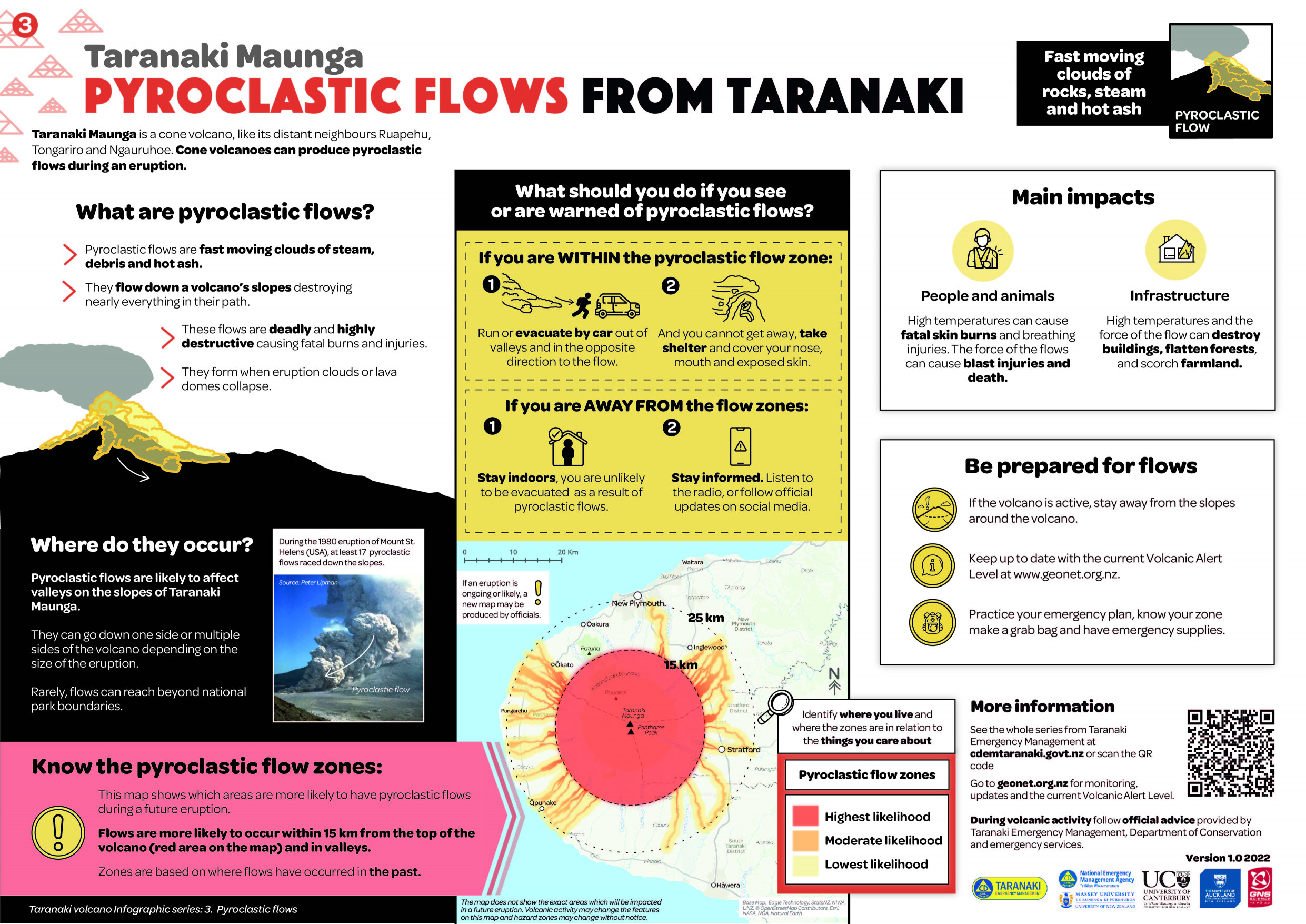 Pyroclastic flows are fast moving clouds of steam, debris and hot ash that travel down the slopes of the volcano. They can travel up to 200 km/h and reach temperatures of 700°c.

They flow down a volcano’s slopes destroying nearly everything in their path.

Pyroclastic flows are more likely to affect areas closer to the top of the volcano and its valleys. They form when eruption clouds or lava domes collapse.

These flows are deadly and highly destructive causing fatal burns and injuries.

If the volcano is active, stay away from the slopes around the volcano. 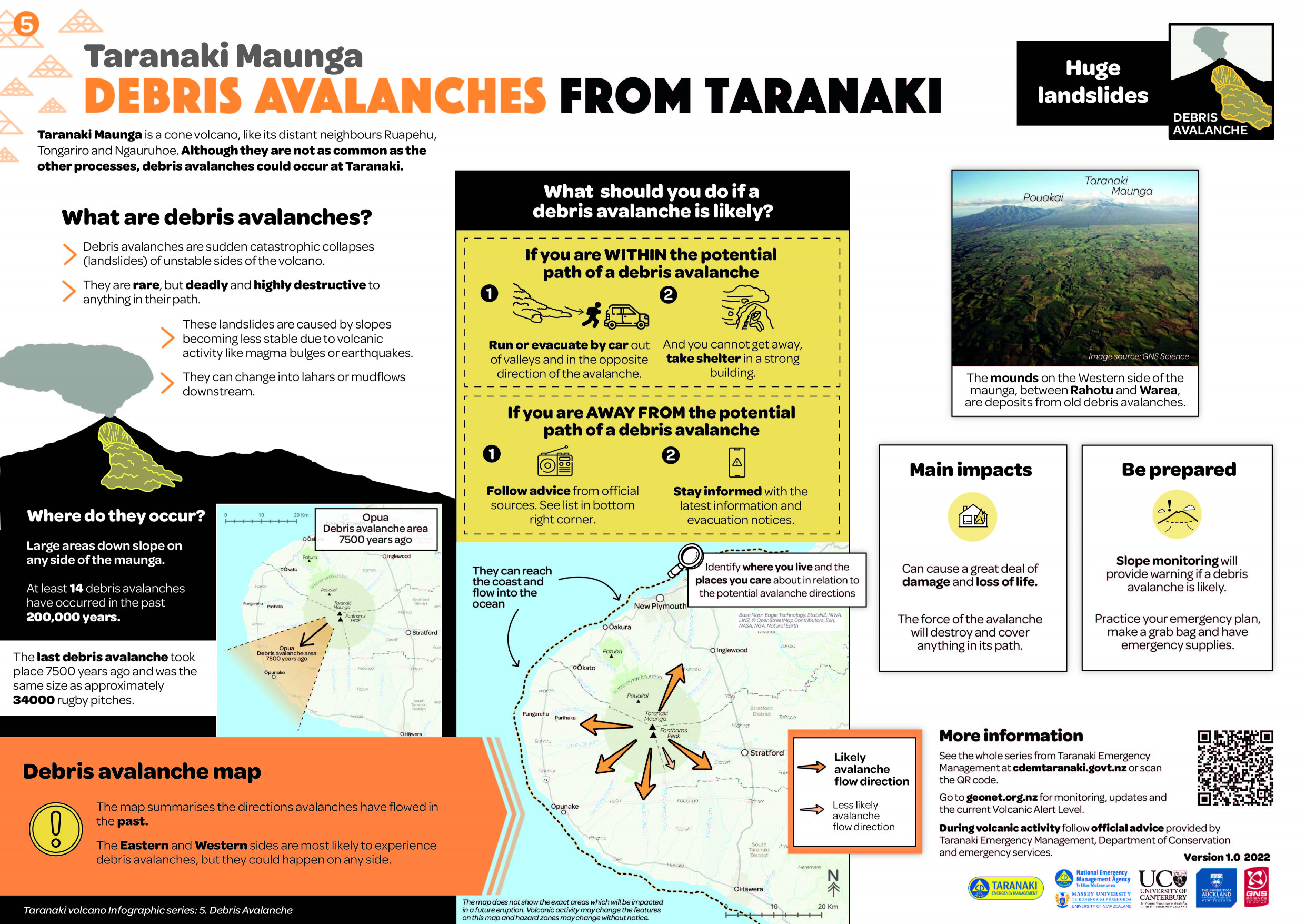 A debris avalanche is the sudden catastrophic collapse of an unstable side of a volcano – particularly cone-shaped volcanoes like Taranaki.

They are caused by slopes becoming less stable due to volcanic activity like magma bulges or earthquakes.

They are rare but highly destructive to anything in their path. They can change into lahars or mudflows downstream.

The distinctive mounds on the Western side of the Maunga are deposits from previous debris avalanches. 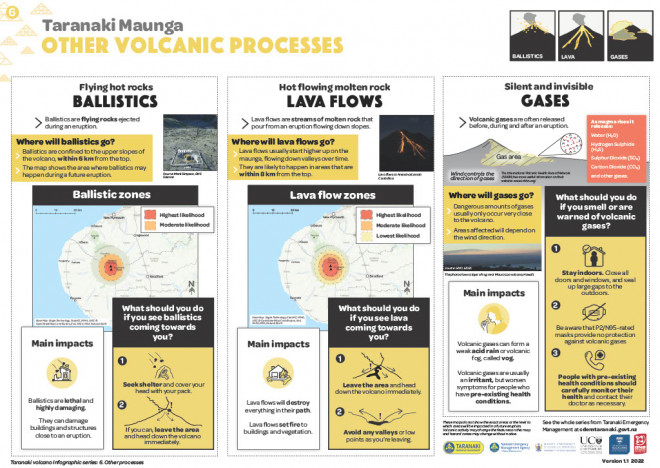 Lava flows are streams of molten rock that pour from an eruption site and flow down the slopes of the volcano. On Taranaki, past lava flows were usually confined to the upper slopes - about 4km from the top.

Lava flows are extremely destructive and will destroy everything in their path.

If you are on the slopes of the volcano, head downhill immediately and avoid valleys.

Ballistics are flying lava and rocks ejected during an eruption. They are usually confined to the upper slopes of the volcano.

Ballistics are lethal and highly damaging. If you see ballistics you should seek shelter and attempt to leave as quickly as possible.

Volcanic gases are often released before, during, and after an eruption.

Gases usually occur very close to the volcano and the area affected will depend on the wind direction.

They can form acid rain or volcanic fog, also called ‘vog’. Volcanic gases can be an irritant to people, but can worsen for those with pre-existing medical conditions.