A tsunami is a series of water surges caused when a large volume of water in the sea, or in a lake, is rapidly moved by earthquakes, slips, or volcanic eruptions.

While a tsunami is not identified as a significant hazard in the Taranaki region, some degree of tsunami risk exists for New Zealand’s entire coastline.

Most tsunamis resemble very strong, fast tides, rather than waves. These can extend inland for a few hundred metres, possibly up to several kilometres in low-lying areas. Much of the damage from tsunamis is caused by the strong currents and floating debris. On land, run-up heights (run-up is a measurement of the height of the water onshore observed above the normal sea level) can sometimes be higher than expected tsunami heights, in very rare cases up to twice as high (where the tsunami is channelled into steep narrow gullies). 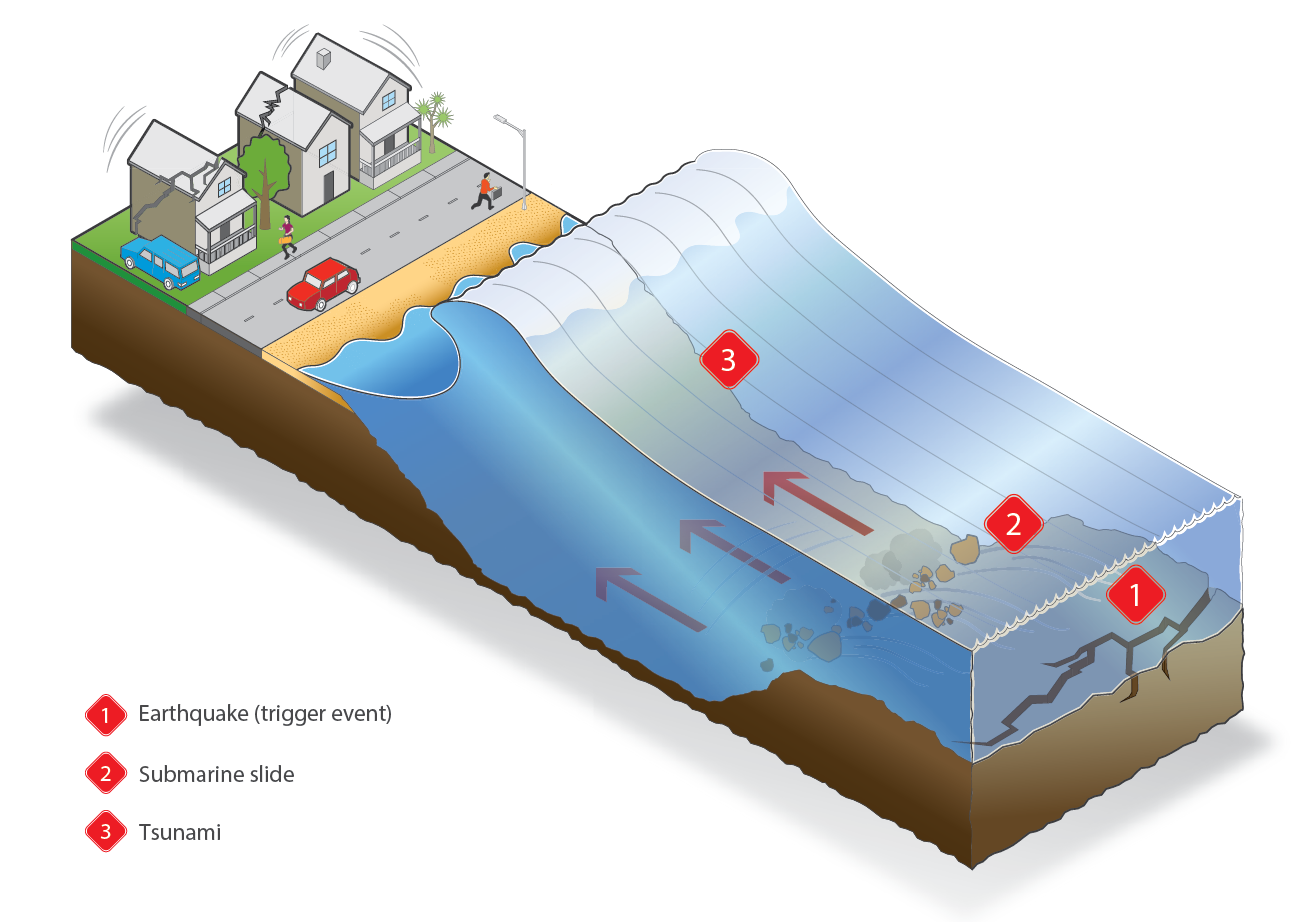 Although predicted potential wave heights have recently been increased for Taranaki (4-6 metres), these predictions are still lower than the 10–12 metres predicted for other parts of New Zealand and tsunami are likely to occur with less frequency here. Parts of the region's coastal communities could still be seriously affected by tsunami. A tsunami event combined with bad weather, high tides and coastal surges could increase that risk.

The risk to community infrastructure as a result of tsunami inundation is lower in Taranaki than in other regions because of the many high coastal areas and cliffs. However, some low-lying communities on the coast or in river estuaries do have a higher risk. Those communities include Tongaporutu, Urenui, Onaero, Waitara, Bell Block, coastal New Plymouth, Oākura, Opunake and Pātea.

The tsunami risk for Port Taranaki is moderate. A large tsunami damaging the port (as occurred at Lyttleton in the Christchurch earthquake) would have significant local and national impact, preventing imports and exports of oil and gas-related products. A small tsunami might disrupt shipping movements, on a precautionary basis, for a few hours.

Sirens are not used to warn of tsunamis in Taranaki. It is important that you are aware of the natural warning signs, and act upon them when they occur.

For a local source tsunami which could arrive in minutes, there won’t be time for an official warning. It is important to recognise the natural warning signs and act quickly. If you have any of the following experiences while you are at the coast:

Move immediately to the nearest high ground, or as far inland as you can.

Official warnings are only possible for distant and regional source tsunami. Tsunami information for New Zealand comes from the Pacific Tsunami Warning Centre and goes directly to the Ministry for Civil Defence and Emergency Management. Taranaki Civil Defence issues regional advice and warnings based on this information.

Official warnings may be disseminated via text alerting, social media, local radio stations, our website, media releases, local authorities and other key response agencies. Depending on the risk, emergency services may physically go to the beaches and low lying area, requesting people to evacuate the area.

You may receive warnings from friends, other members of the public, international media and from the internet. Verify the warning only if you can do so quickly. Follow official warnings over informal warnings.